I have arrived safely at Tallinn Backpackers, the hostel where I will be working as a volunteer for a month. It was hard to say goodbye to my friends in Savitaipale. I didn’t think I would feel so sad and I gave each of them a gift from the Flea Market as a souvenir ❤

The route I took from Savitaipale (Finland) to Tallinn (Estonia) was the following one: 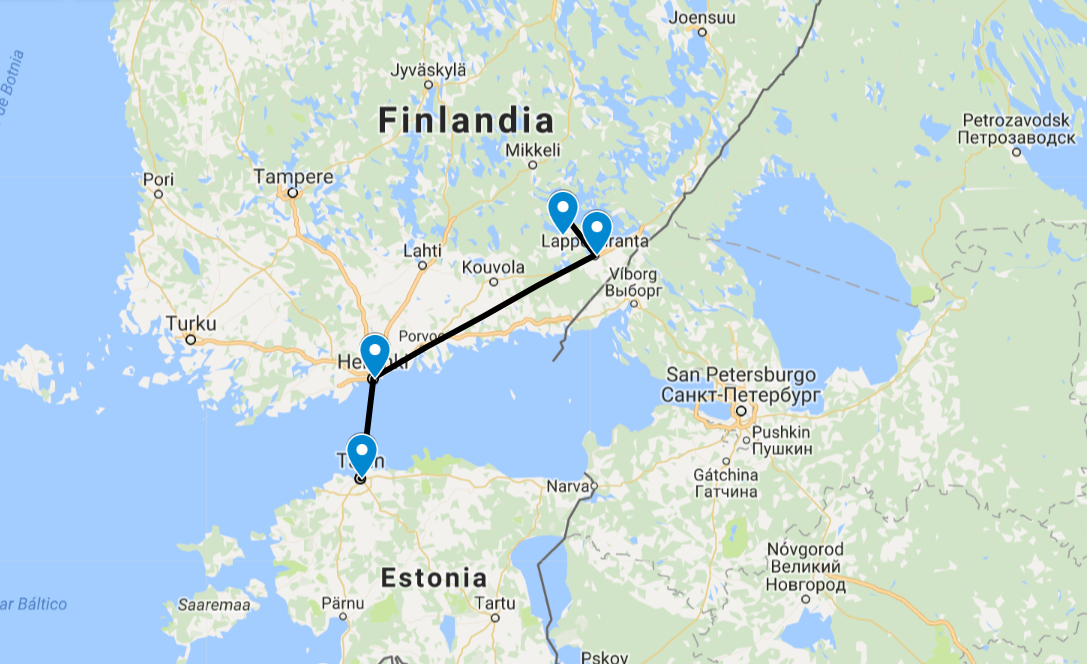 I took the bus in Savitaipale at 8:55 AM with the Savonlinja company. Everything worked as scheduled, without any incident and, as always, with a remarkable punctuality to reach the destination. This was the first time that I changed buses in Lappeenranta and not in Mikkeli, for a mere matter of time. Once in Lappeenranta, I had about 40 minutes to the next bus so I stopped for breakfast at the train station cafeteria. Just like in Mikkeli, the bus station and the train station are next to each other.

From Lappeenranta to Helsinki

At 10:40 AM I took the bus to Helsinki with Onnibus. Everything was fine too, we arrived at Kamppi station (which is in Helsinki’s city centre) at 13:45 PM, with apparently enough time to take the ferry to Estonia.

As it was already lunchtime, I stopped at the Burger King in Kamppi to grab something to eat. Nothing out of the ordinary: Crispy Chicken menu with potatoes and natural water. And here, something happened to me.

When I picked up my order, the lady gave me a plastic cup for the water. She probably followed the protocol or did it with good intentions, but I prefered not to waste a plastic glass when I already had the bottle. I didn’t use it at all (I hadn’t even touched it) so I went to the desk to return it. The employee reluctantly told me to throw it away because “she wasn’t going to give an used glass to the customers”. Maybe she misunderstood me, but if the glass have not been used I don’t think there would have been a problem in reusing it. I believe it is even worse to throw away an unused plastic glass.

Between one thing and another, time passed… and here is when the trouble started.

From Kamppi Station to the ferry

It was 14:20 PM and I had an hour and a half until the ferry departed. However, there were two things I hadn’t taken into account:

Everything would have been fine if it wasn’t for the fact that I got lost on the way to the ferry. It was a total chaos because I was going with the exact time and I wasn’t sure where the place was, for many reasons:

The most confusing thing was that I was looking at my phone the whole time to see if I was on the right track. According to it I was, but in reality I wasn’t. The place that Google was pointing at wasn’t where it was supposed to be. I looked at the clock all the time because at 14:45 PM they closed the check-in desk, and I had only a few minutes left. Between the heat, the stress and the thousand layers of winter clothes I was wearing, I was sweating like a pig:

I entered a boat terminal of ships that were supposedly going to Estonia. My surprise was huge when I saw that all the counters were closed and that there was ABSOLUTELY no one in the whole terminal. No employees, no passengers, no tourists… Nobody, it was a totally dead building. For a moment I thought that the ferry had left without me but it couldn’t be possible, because it was supposed to leave in half an hour. When I saw that I wouldn’t find any answers there, I decided to use other techniques.

I saw some workers in a warehouse who were taking a break and I ran over to ask them. Luckily, the guy was very nice and showed me how to get to the right terminal of my ferry company. According to him, I would be there in 5 or 10 minutes. I think I did it in even less because of the rush and stress that I had…

The check-in for the ferry is like the one for the plane. You have to go to the company’s counter, show your ID or passport and reservation number, and they will give you your boarding pass. After, you have to scan the boarding pass to access the platform that takes you to the ferry. We were all going to the same place so I just followed the other passengers.

You don’t know how surprised I was when I saw the boat I was going to travel on. I was expecting a small ferry and this is what I found: 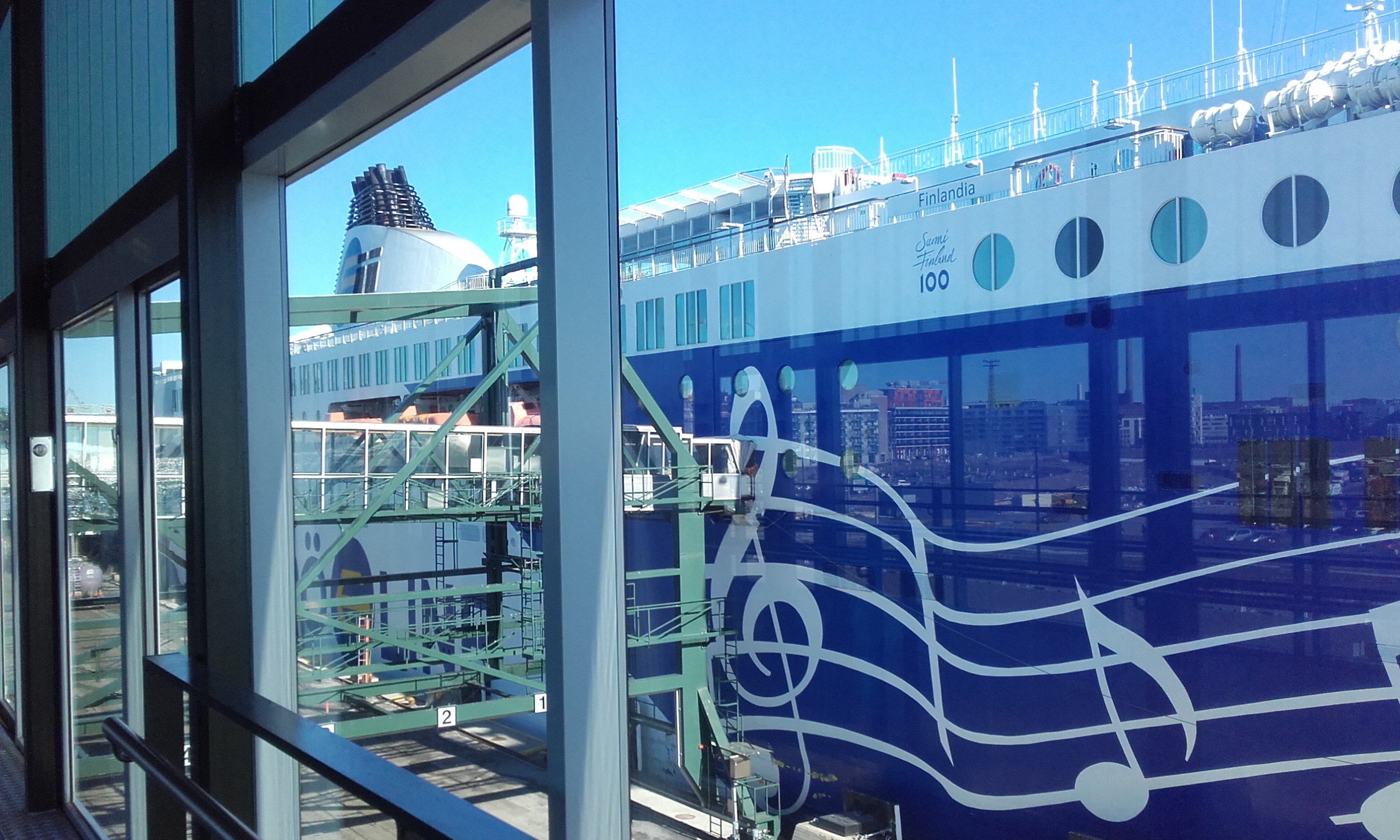 Although in this image taken from the Internet you can see it better:

It was like a cruise! Like the ones with cabins, fancy restaurants, gaming machines and everything. For a moment I thought I was on the wrong boat and asked one of the crew members. Indeed, I was in the right ferry. At least I knew that it would take me to my destination.

The journey from Helsinki to Tallinn by ferry

I think that all the passengers checked-in well on time so we left 10 minutes earlier than scheduled. First, I went to the outside area to watch the boat leave. I saw how we were leaving behind the small islands in Helsinki and then we reached a point where we could only see water around us. We had already left Finland behind. I sat there at one of the tables and walked to get a better view of the landscape. However, you couldn’t look out through the railing because the sides of the boat were closed to the public, as well as the bow and stern. 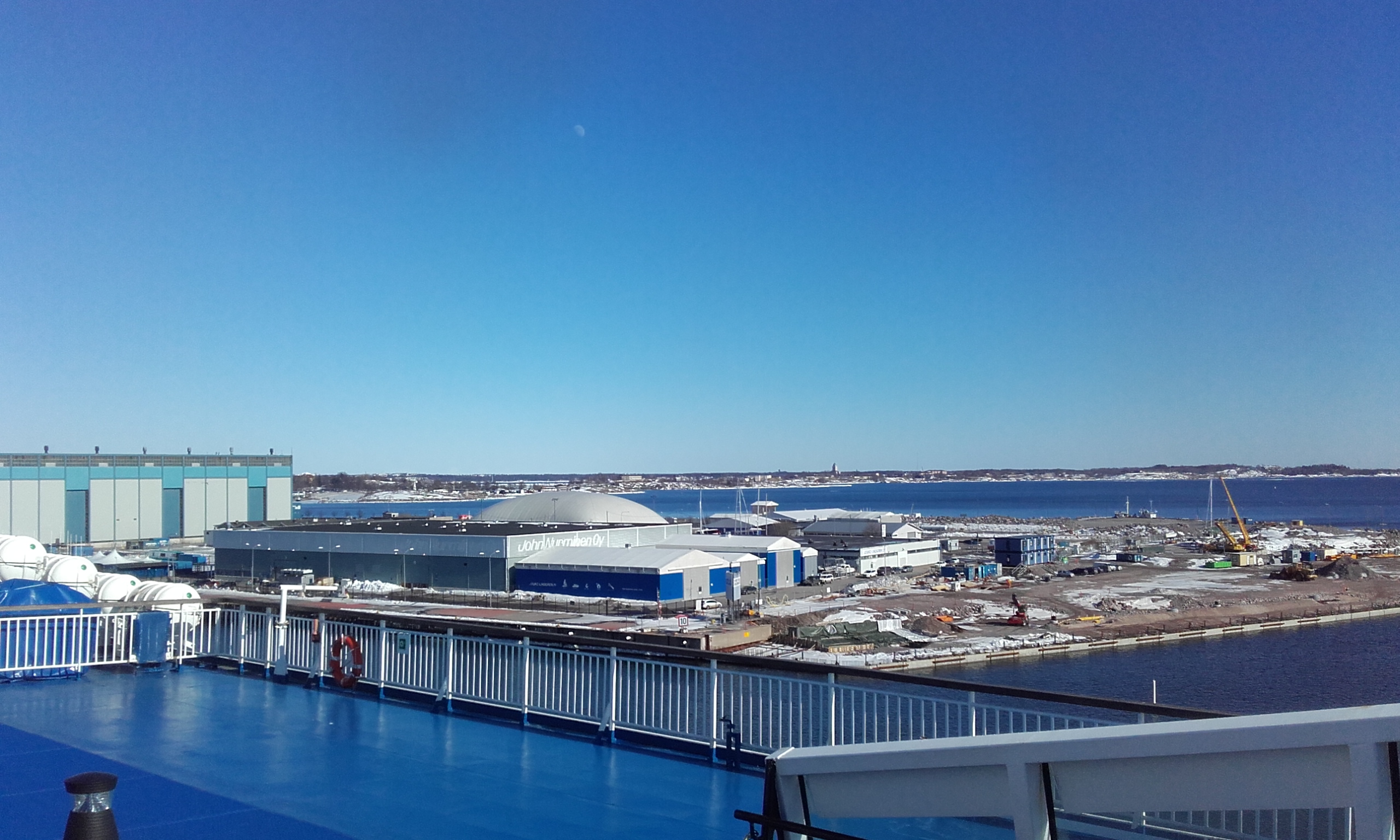 After a while, I went inside the ferry to see how it looked like. I was dying of curiosity because it was literally like a cruise ship! Well, actually I think it was a cruise because people came and went from the cabins. The ferry had several floors, each with a bar, bathrooms, cabins, arcades, concert hall… on one of the floors there was even a premium lounge.

As I didn’t really know where to go, I opted for a seat in the bar/concert hall with a view of the sea. Unfortunately, all the tables in the window were taken but I found one with a decent view, next to the performance floor: 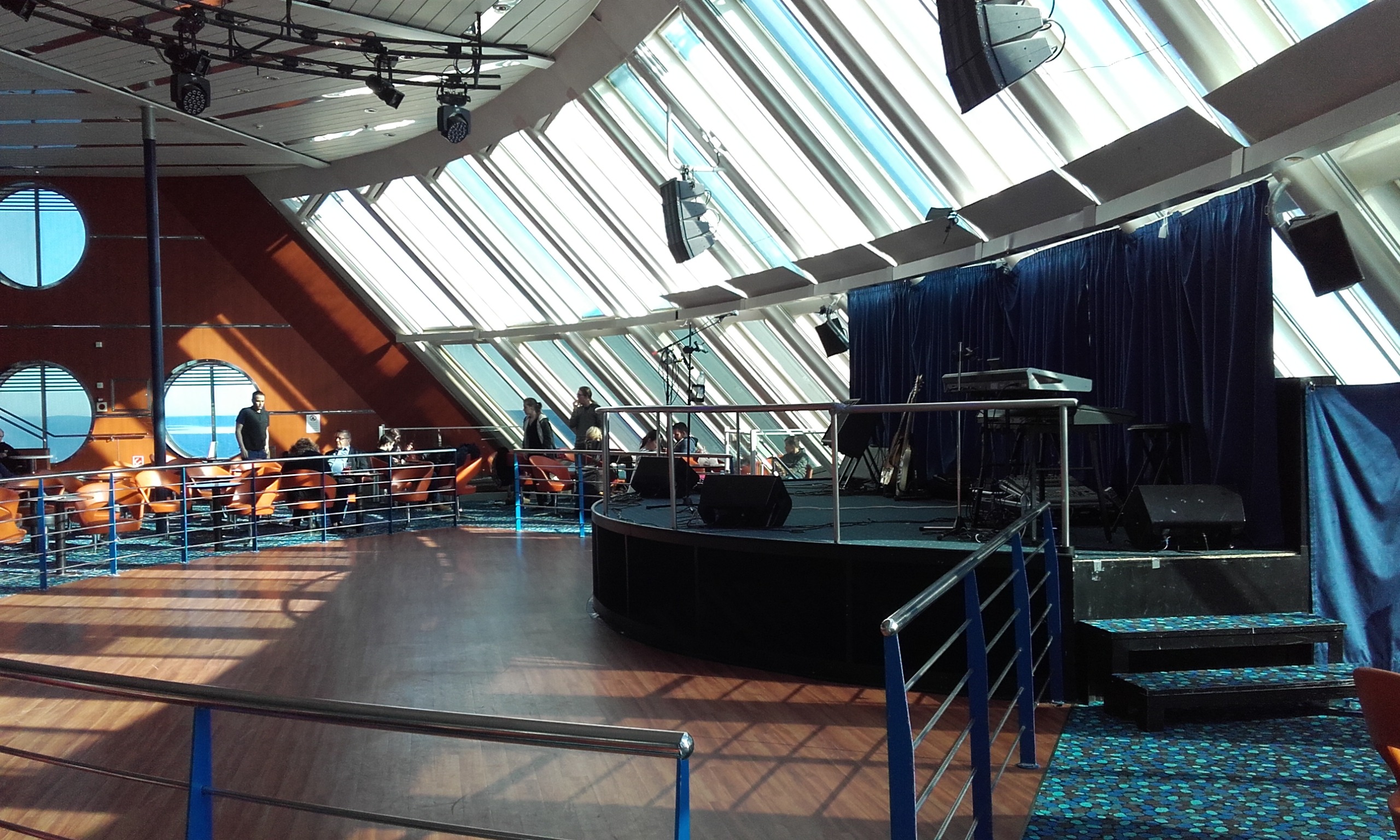 The music that they were playing was quite good and varied, from Finnish songwriters to rock bands like FallOut Boy or My Chemical Romance. At 4.30 PM a live performance by a jazz group began and some ladies and gentlemen even danced in pairs on the dance floor.

Touching down: finally in Estonia!

As we got closer, we could see Tallinn in the horizon: 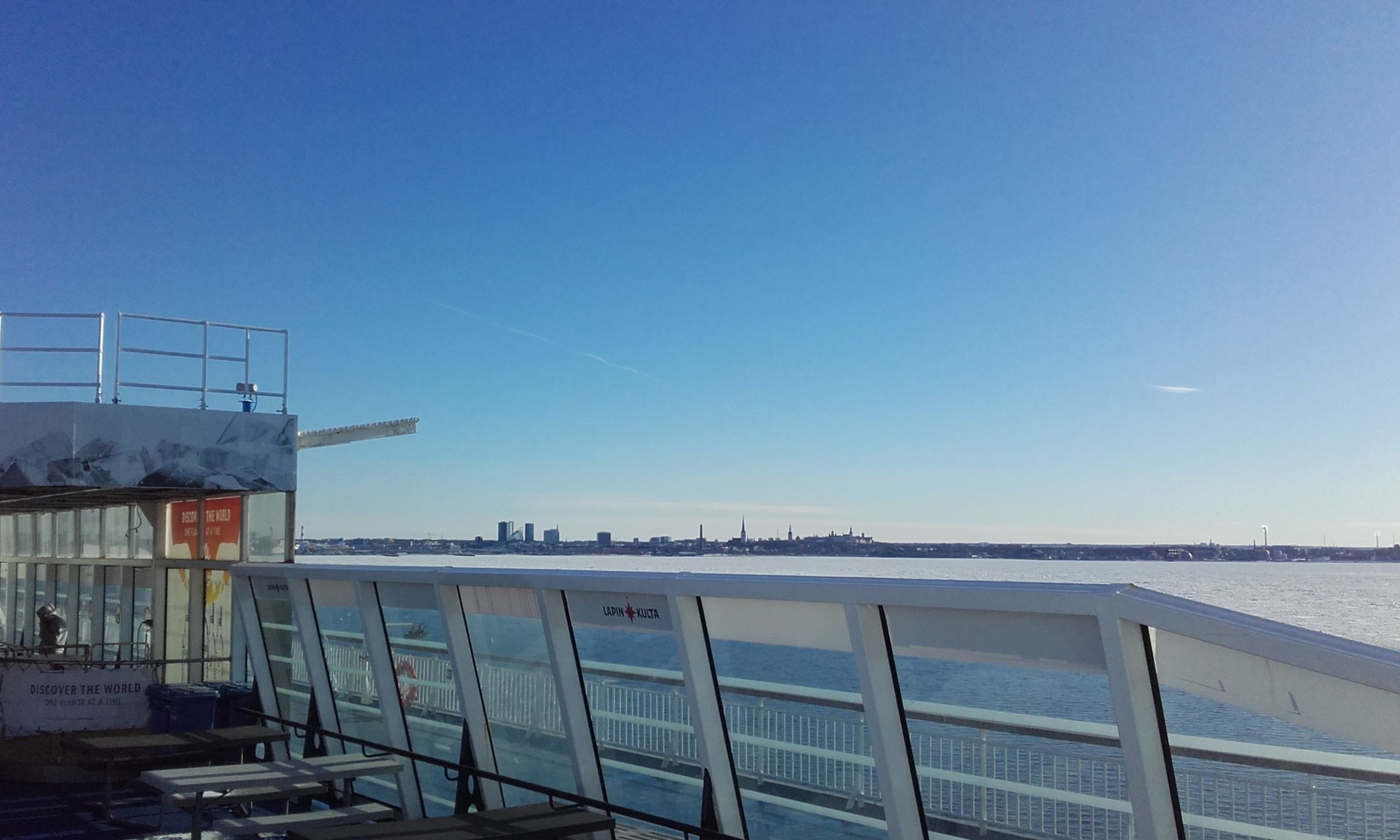 We arrived on time at 17:30 PM but we waited 20 minutes to leave the ferry. My mobile phone had already died from the cold so while the boat was docking I connected it to a socket somewhere in the hall to revive it a bit and see how to get to Tallinn Backpackers. The hostel is only a 15 minute walk from the boat terminal. When I left the port and entered the old town everything looked completely different. There were medieval buildings, a wall, parks, colorful houses… The first impression I had of Estonia and in particular of Tallinn is that it is a place with a lot of charm.

Once at the hostel, I met the guys who will be my colleagues during the weeks that I will spend as a volunteer in Tallinn Backpackers. We will be three volunteers: John, from Ireland; Jerome, from France, and me from Spain. Nothing compared to Savitaipale, where the last few days we were 7 people.

They showed me the hostel and so far I have found it very cute and welcoming. It’s a backpackers hostel and the guests are mostly people who travel alone. For the time being, I will spend the first two nights in one of the shared bedrooms in the hostel, until I can move into the staff room.

Once I was settled in the hostel, I went for a walk downtown with one of my colleagues. On the way, we stopped at Rimi’s supermarket to buy some supplies. Meals are not included in this WorkAway, so during this month I will have to do my shopping and cook for myself. I was amazed at the prices in Estonia and the big difference compared to Finland. For example, a bag of bread in Finland cost about 2€, and here in Estonia I bought the same for 0.28€. Unbelievable!

Tomorrow morning I would like to join the free walking tour to know the city better. I’m going to work in the reception of a hostel so I’d like to know Tallinn very well in order to give the best assistance to our customers. For now, it’s time to rest after this travel odyssey.